A man who has seen much directs his words to the youth. Hélie de Saint Marc participated in the resistance fight against Nazi Germany, survived a concentration camp, fought in the Foreign Legion and revolted against Charles de Gaulle during the Algerian war in 1961.

In the following we have translated a text from the French which we want to recommend to every follower. It is the legacy of a great man – specially addressed to YOU!

When you have known everything and its contrary, when you have lived a lot and you are in the evening of your life, you are tempted remain silent, knowing that each generations pain is enough, knowing also that research, doubts, questioning are part of existences nobility. Meanwhile, I don’t want to avoid, and to this young listener, I would answer this, remembering what a contemporary author used to write:

« Don’t settle in your thruth, and don’t try to impose it as a certitude, but learn to offer it while shivering, as a mystery.»

To my young listener, I would say then, that we live in a difficult period, where the base of what is referred to as Moral, termed today as Ethics, are constantly in change, in particular in the domain of life, the manipulation of life, and the interruption of life. In these domains, terrible questions await us in the decades to come.

Yes, we live in a challenging period where systematic individualism, profit and the materialism, are the dominant forces of the human spirit.

Yes, we live in a tough period, in which the questions are always about ones rights but never about duties , in which the responsibility, which is the measure of fate, tends towards being obscured.

But I would say to my young listener that despite all of this, he has to believe in the greatness of human adventure.
You have to, until the last day, until the last hour, carry your own burden.

Life is a fight, being a man is a rough trade.

Those who live, are those who fight.

Everything has to be conquered, all has to be deserved. If nothing is sacrified, nothing will be obtained.

I would say to my young listener that, for my very modest part, I believe life is a gift from God and that you have to discover beyond what appears as worlds absurdity, a signification for our existence.

I would tell him that he has to find through difficulties and ordeals, this generosity, this nobility, this miraculous and mysterious beauty scattered all around the world, that you have to discover those stars, which guide us where we are burried ourselves in the deepest of nights obscurity, and the sacred shivering of invisible things.

I would tell him, that each man is an exception, and has his own dignity, and that you have to respect this dignity.

I would tell him, that despite and against all, he has to believe in his country and to its future.

Applying this these virtures, is perhaps the 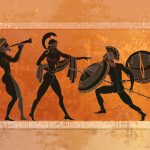 The completed warrior – ancient Sparta and its idealTacphilosophy